Geoff was the life and soul of the Fleet and District Beekeepers’ Association for decades. 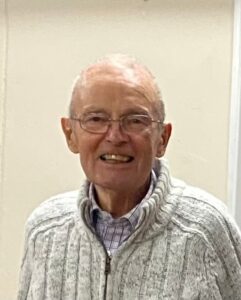 Sparsholt was the venue for his initial beekeeping education in the late 1970s. He built his own hive as part of his introduction to beekeeping at Sparsholt.

The first person many members spoke to was Geoff. He tended to be near the door at the start of monthly meetings, always ready to chat with new faces as they arrived and make them welcome.

Geoff was active in training beginners and assessing candidates for the BBKA Basic Certificate. He was unstintingly generous with his time in supporting any member who needed advice or help. And Geoff’s help was always valuable, based, as it was, on a great wealth of experience. That experience was gained over many years and with many hives. With his wife Lynn, Geoff ran scores of hives when his beekeeping was at its busiest. He was particularly proud of the hive transporter he fashioned from a decrepit caravan. He used this to take hives to the heather in the New Forest.

At the turn of the century when our membership was very low, Geoff was one of the small band who kept things going. He was instrumental in raising funding allowing us to purchase our microscopes and set up a practical training apiary at Hook. This helped the association turn the corner and membership was over 100 when he stepped down as secretary in 2014.

He remained an active committee member until his stroke last year, he also stepped up to the challenge when FBKA was formally registered as a charity in 2020 and he became a trustee.

Geoff’s most recent role was as President of FBKA. In that role one of his tasks was to present certificates to those passing BBKA exams. This picture is of him at last spring’s certificate presentation.

Many members knew Geoff well and will miss him very much. We have wonderful memories of Geoff; he was and will remain a legend in FBKA. Our thoughts and best wishes are with Geoff’s family. The committee will send condolences on behalf of the association and ask for information about the funeral.